How to Work with Vanilla Discoloration 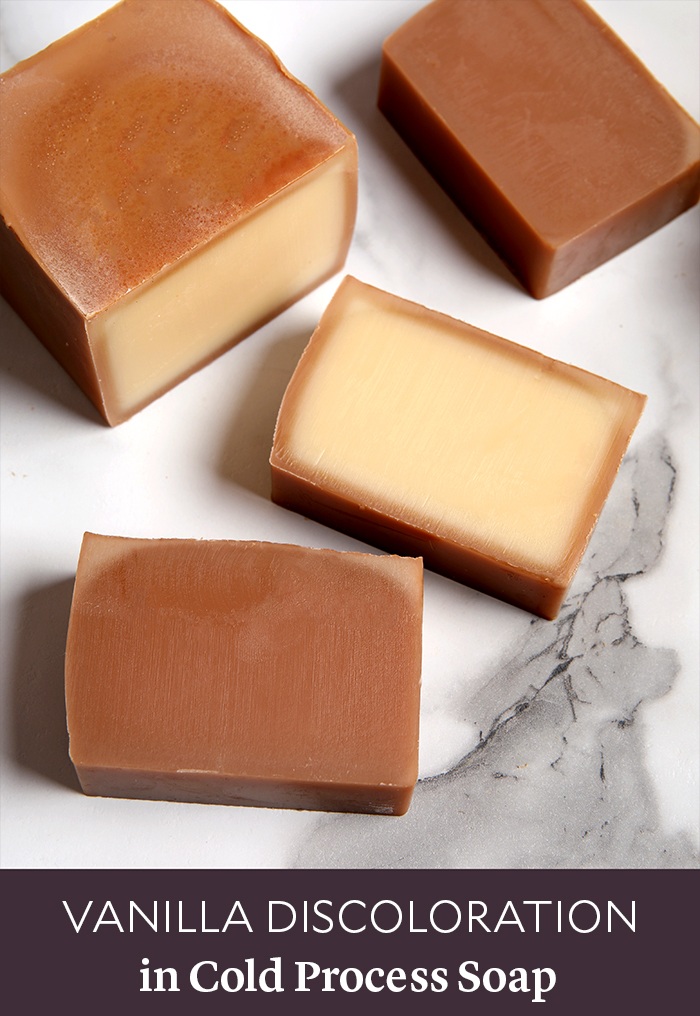 One of the questions we get most is, “Why did my soap turn brown?” If you’ve made a few batches of soap, you’ve likely encountered discoloration. This post talks about what causes the color change and how to work with it.

What causes discoloration of soap?

It’s often caused by vanilla, which is a flavor derived from orchids. Vanilla pods start out very green and then darken to brown as they age and ripen. The darkening is caused by various reactions in some of the components. One of those is vanillin, which is the organic compound that gives vanilla its flavor.

Vanillin discoloration is a 100% natural process. Depending on the percentage in the fragrance, the soap can discolor anywhere from off-white to dark brown. It usually takes a few days to appear, although certain scents may not discolor for a few weeks. It shows up first on the part of soap that’s exposed to air. That means the sides discolor, but once you cut into the bars the middle is still white. Eventually, the whole bar will darken.

The soap above is scented with Sandalwood Vanilla Fragrance Oil, which discolors dark brown. It’s 1 day old and the discoloration hasn’t fully developed. The tan color will continue to darken over time. You can also see that the soap went through partial gel phase in the center, and the discoloration developed faster there.

Other aroma chemicals may cause discoloration as well. We include performance notes and finished photos of the scents in soap, so make sure to read those before use. You can find all our fragrance oils here.

How to prevent or work with discoloration

If you’re making melt and pour soap, you can use Vanilla Color Stabilizer to prevent discoloration. We recommend a 1:1 ratio with the fragrance.

We don’t recommend vanilla color stabilizer for cold process soap because the results are inconsistent. It may not prevent the discoloration at all, or it may only work for a few months.

If the fragrance has a low vanilla content, you can use titanium dioxide pigment. It lightens tan or light brown discoloration. Start by mixing 2 teaspoons of titanium dioxide into 2 tablespoons of a lightweight oil. At trace, add 1 dispersed teaspoon at a time. It’s tricky to know exactly how much to use because the soap hasn’t discolored yet. Just keep adding color until the soap is pretty light. We used titanium dioxide in this Creamy Goat Milk Soap, which is made with Oatmeal Milk and Honey Fragrance Oil.

With a lot of titanium dioxide, you can get glycerin rivers. We recommend a 5-10% water discount to prevent those. It also helps to keep the temperatures around 115-120° F and store the soap in a cool place.

If the fragrance has a higher vanilla content, the titanium dioxide can only lighten it so much. In that case, we recommend embracing the discoloration and working it into your design. You can scent some of the soap so only one part discolors, like we did in the Cinnamon Cocoa Soap. You can also scent the whole batch.